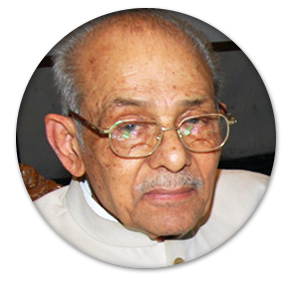 (A Man for National Renaissance and Rejuvenation)

Shri Anandshankar Pandya (96) participated in the Freedom Struggle of India in 1942, when he graduated from the Banaras Hindu University. Hence, he has great concern for the well being and progress of the country, for which as a journalist he has authored several books and more than fifty articles on politics, economics and religion, which have been published in many national newspapers. Pandya ji has distributed crores of pamphlets all over India to create swabhiman and swavalamban. This has created a Cultural Revolution and awareness of dangers facing the county, for which he has received hundreds of letters of praises. He has been doing all this since the last fifty years without a break. Shri Pandya has also sent hundreds of email all over India for the uplift of the people. He has also been a disciple of Jayaprakash Narayan and Vinoba Bhave

Shri Pandya has interviewed Acharya Kriplani, Morarji Desai, Justice Chagla, Chandrasekahar and others, which have been published in various national newspapers like The Times of India, Navbharat times, Mumbai Samachar and others. He has sponsored 15 big advertisements professing the moral values of Hinduism in these newspapers Shri Pandya has delivered speeches in conferences in New York, Frankfurt, Singapore and Durban. He was a delegate to the UN Millennium Peace Summit in 2000 and also the Vivekananda Centenary in America.

Shri Pandya was felicitated in America for his learned writings and social work through the Vande Mataram Foundation and Save India Foundation (Deshbachao Sangh), of which he is the President. Both these foundations are working for the emancipation of the very poor people. Shri Pandya arranged a donation of 3.50 crores from Shri Anil Agrawal to the Banaras Hindu University Hospital for open heart surgery.

Shri Anandshankar Pandya’s most ambitious project under the SAMARTH umbrella is Sushruta Samarth Dialysis Project. Under this project, his vision is Sabka Saath; Sabka Swasthya. In India, there are more than 90 lakhs kidney patients, the treatment of which is very expensive. Samarth is facilitating the best infrastructure for kidney disease and free dialysis service centre in India.

SAMARTH is also working on the Dr. APJ Abdul Kalam-initiated Lead India 2020 mission “Aap Badho Desh Ko Badhao”. This is a mission based on Goal, Attitude Knowledge, Skills & Values oriented programme for transforming the youth to achieve a developed India by 2020.

There are many such charitable acts done by Shri Pandya. He was felicitated by the Vice Chancellor of Banaras Hindu University (BHU) on the occasion of the 3rd International BHU Alumni meet in 2007.

Shri Pandya has formed two other trusts for helping the education of the poor. He has collected crores of rupees for the charitable works done by the Vishva Hindu Parishad. He has authored a book Incredible India, which contains the profiles of great persons of both ancient and modern India from all fields of life, which was released by Swami Dayananda Saraswati in the USA at a big international gathering and by Sri Sri Ravishankarji in Delhi before a large gathering of prominent persons, which Pandyaji also addressed. This book was presented to President Obama when he visited India by Smt. Sushma Swaraj, the then leader of Opposition in Parliament from which President Obama quoted on the greatness of India in his speech in parliament.

Shri Anandshankar Pandya is an industrialist and big diamond exporter with offices in the US, Belgium and Hong Kong. He is the president of the Mahamana Malviya Mission Maharashtra chapter which organizes programmers on Paandit Madan Mohan Malviya. The last progamme was addressed by former President of India Dr. APJ Abdul Kalam. In order to create goodwill between Hindus and Muslims, Shri Anandshankar Pandya has also been helping the nationalist Muslim movement initiated by the veteran journalist Padmashri Muzaffar Husain.